As the year draws to an end, I thought it would be appropriate for me to look back at what the studio has accomplished this year.

When we started the journey around mid February of this year, we had yet to form the full studio team. While we had a vision of the type of game we wanted to make (that is a fantasy turn-based tactial RPG), we didn’t quite have concrete plans or the game design ready yet. A lot of early work went into developing the game design and prototyping the tactical combat layer that would eventually help shape the vision as we moved forward.

Here’s a brief look at the progress we’ve made so far this year on the Tactical Combat Layer:

Even with the weight of the studio thrown into developing the combat layer, we haven’t lost sight of the bigger picture. For the narrative layer, we completed the worldbuilding (interesting sidenote: Merriam-Webster’s dictionary is currently looking at “worldbuilding” to be potentialy added in; Igor is pretty excited about it – enough to put this annotation in) with 5000 years of world history written up. We also have the bare bones skeleton story nodes completed and ready to be fleshed out going into 2017. For the strategic conquest layer, we had most of the conquest features done along with the basic design and UI pass waiting on full implementation and integration.

Looking at our commit history, you can see the most frequently used words in our commit log on our main repository. As you can see, we worked a lot on ability skills implementation and cover. That comes as no surprise really as those are the two main components of our tactical battle implementation this year.

Also, if you would like to see the commit flow of our main repository, gource produces a pretty cool video that you can see below. Just ignore the 2009 timeline on top as we had a power loss in the mid of March that caused the server to reset its BIOS time which we didn’t notice and correct until early April.

We end this year with a studio-wide soul searching – gathering around our meeting table and discussing what went right in the past year and what could have been improved on. The idea is to improve our studio next year so that we could make a kick ass game that we all enjoy playing.

Here’s a picture of the whiteboard we had while we are discussing it: 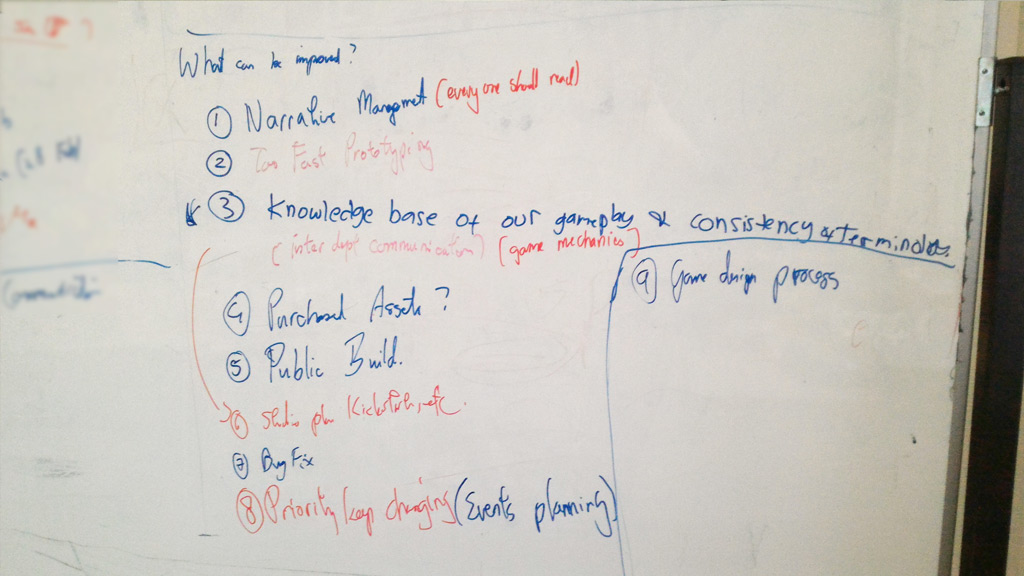 Going forward, our plan is to launch our Kickstarter campaign early next year. We think kickstarter is an amazing avenue to engage with our players and help us to shape the game we all will enjoy playing. It is also very likely that we will have an opportunity to show our game in Pax East 2017 in Boston, MA.

To that end, one of the key milestones we would be doing in the first quarter of next year is to have a full game loop to play. This is the integration of the strategic conquest layer, the narrative layer and how it will feed into the tactical combat layer. We hope to show a vertical slice of our game on a wider stage of Pax East.

The journey ahead is still long, but that’s so we can make the best game we can with the resources we have. We aim to release our game some time in 2018.

Thank you for joining us in this journey. We hope you would feel that the journey is as gratifying to you as it is to us. I’m sure all of us are looking forward to the proverbial pot of gold at the end of rainbow, when we release our game at last. We look forward to playing this game as much as you do.