Hello, this week, we’ve got a triple tag team blog post from our artists: Lienny, Jennifer, and Ken. Ken, you’ve already met. Lienny is our lead modeller in charge of doing a lot of stuff, from character and environment modeling to any art-related technical or engine difficulties. Last but not least is Jennifer; she is our modeler in charge of handling most of the environment art.

For this blog post, Lienny and Jennifer have picked some of the maps that they have worked on. Then we will go through and explain some of our process of making those maps pretty, including the quirks, workarounds, and solutions used and/or encountered.

Environment creation was initially a confusing process, since we only have a limited talent to work with: one multi-function Art Director and two 3D Artists in the studio. Thus creating a scarcity in environment concepts. A bunch of references given by Ken were very broad overviews of what the final environment ought to “feel” like instead of what they should look like. 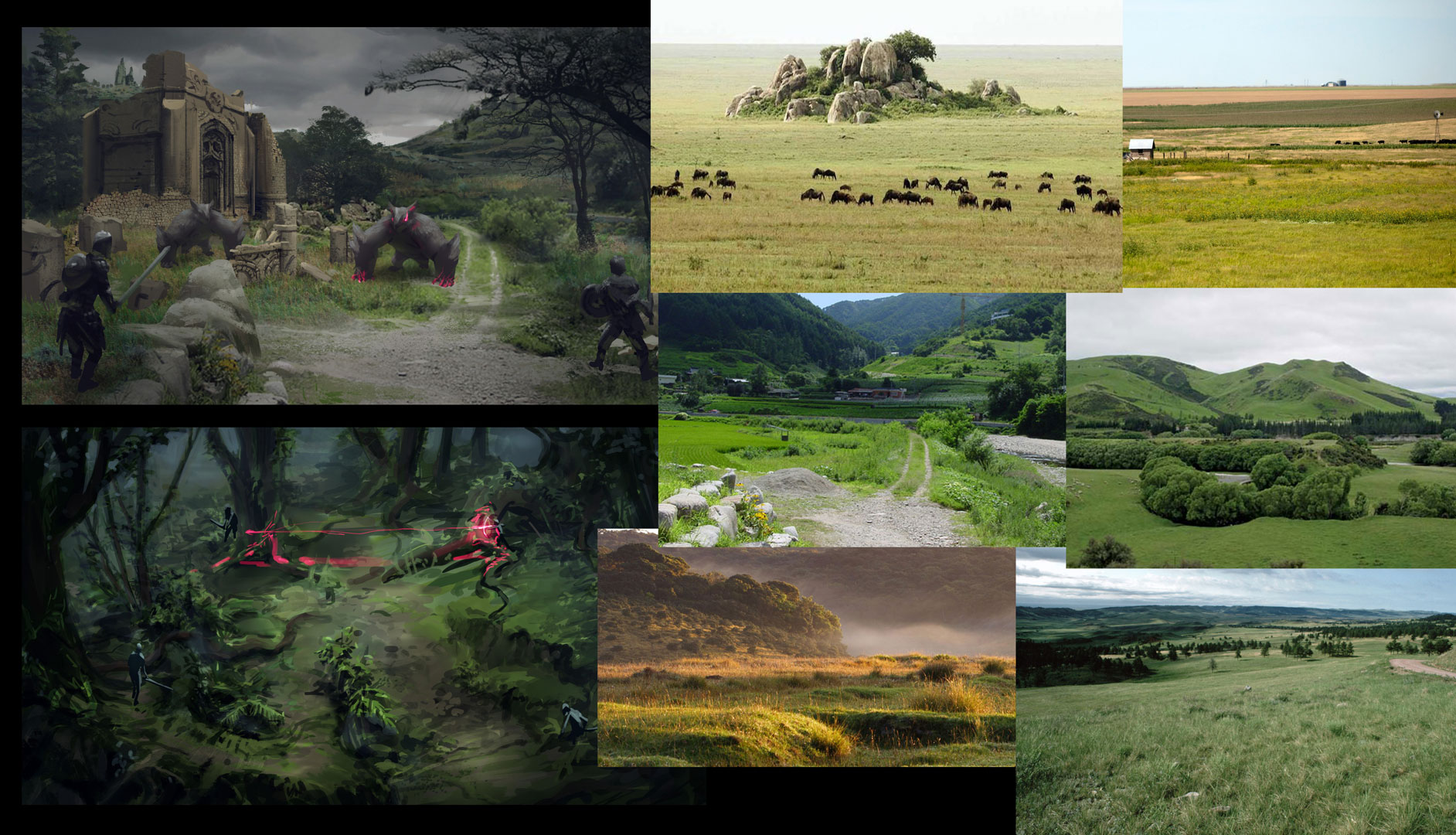 The Game Designers would pass us a grey box of the map layout and stage. As the blocked out maps make their down the pipeline to Lienny and Jennifer, the onus fall on us to interpret the gray and colored blocks. With little to go on, this process actually gives the environment team a lot of freedom in approaching the map design. 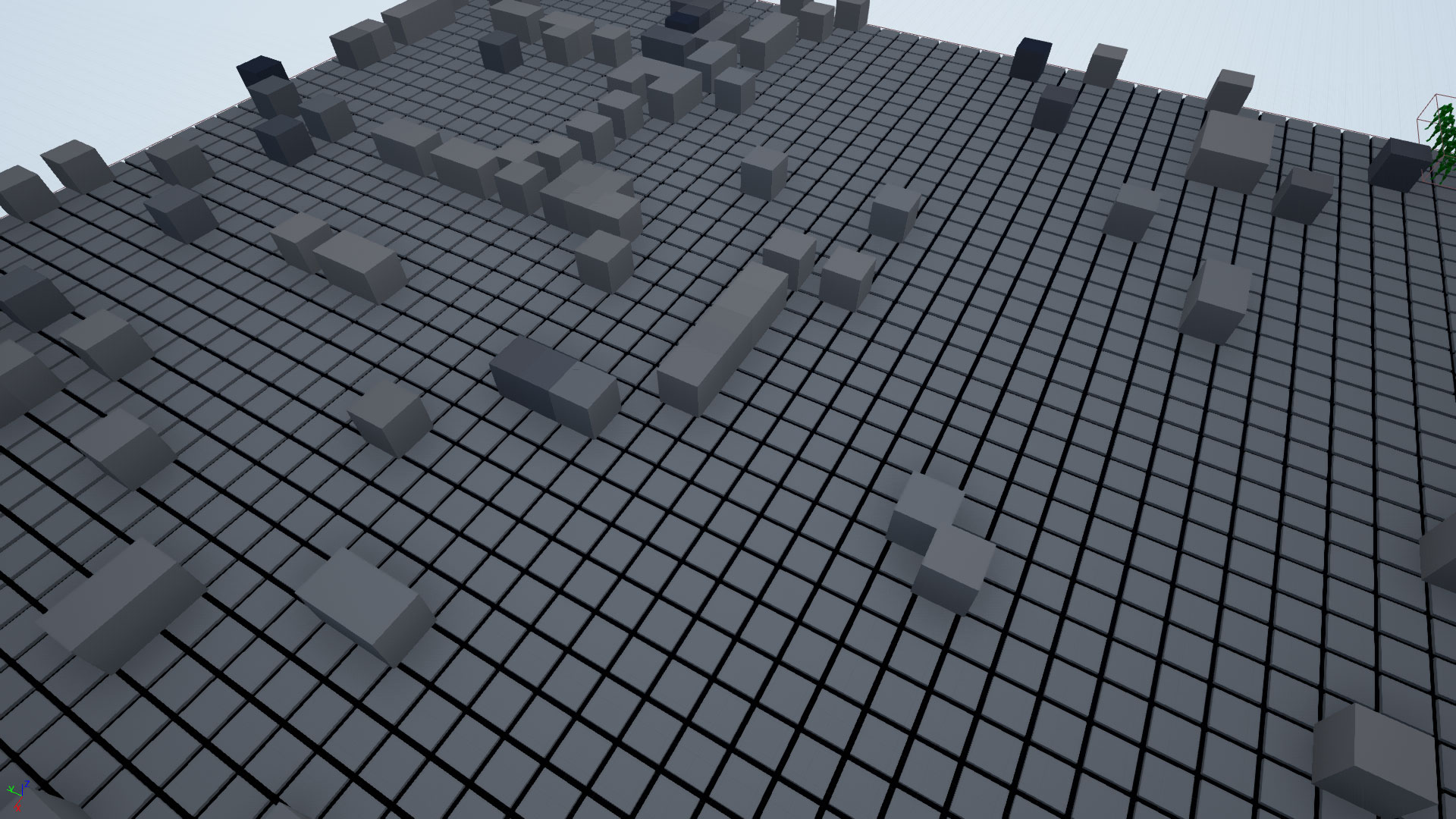 As with any experiment, it does go through a lot of iterations, screenshot paintovers, and additional custom assets as requested by the level designers, concept artist, and environment artists. 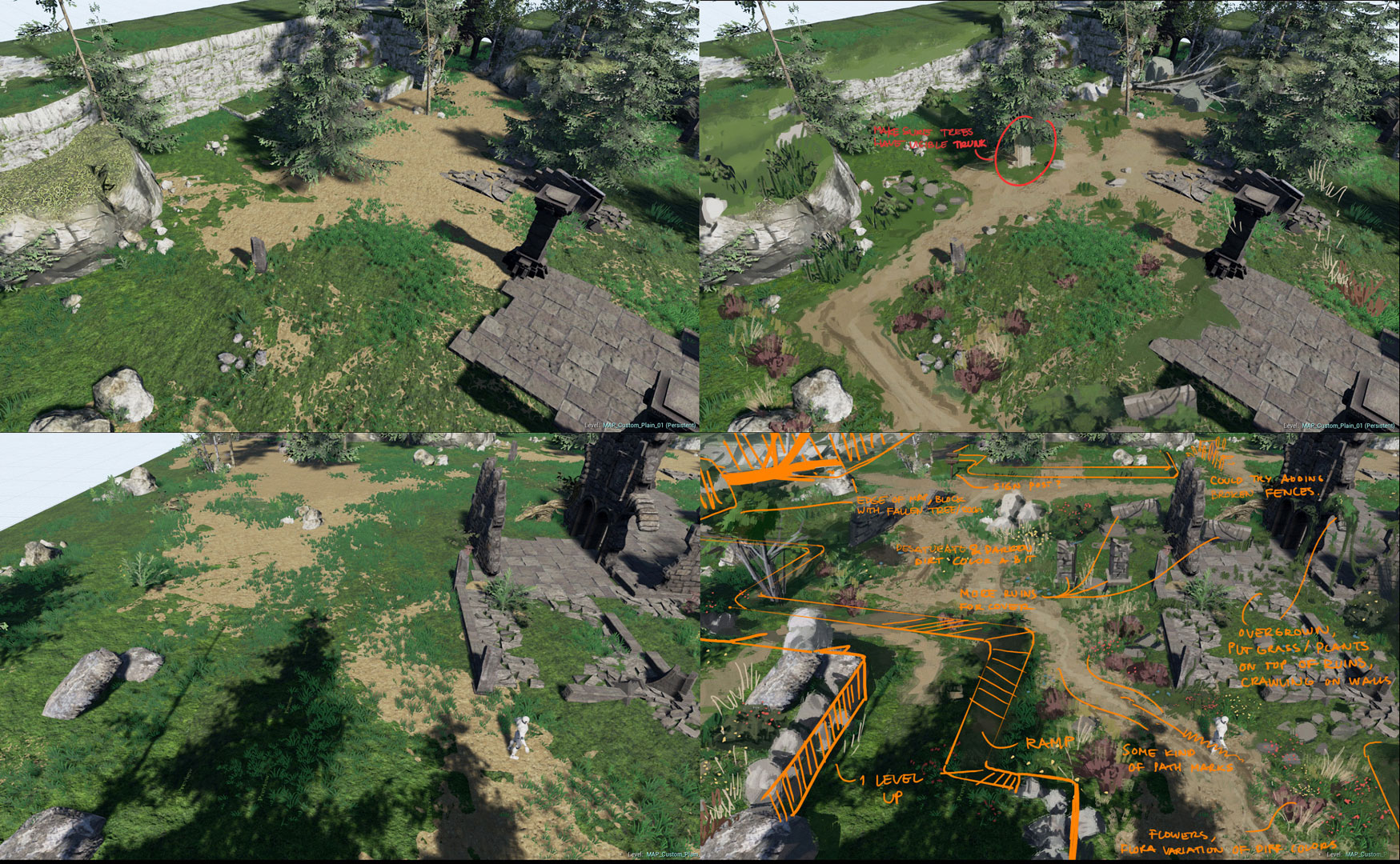 As we experiment with the visual overview of the environment and how much we can push the quality, the level designers were also working in parallel to design maps according to the play style (or in some cases visual style) they were trying to achieve. Which brings this to the first issue: visual limitation. The maps are designed based on a grid system, which means that the set dressing will also need to follow the grid. Unique stage designs and placements do not translate well to the set dressing stage. Here is where a lot of creative solutions need to be discussed and brainstormed so we, the artists, are able to give the best visual according to the stage design.

This is a sample of one of the very first maps after a few iterations. Since this map is designed as a generic map with a smaller playable area, and there was not much requirement for looks or guideline asked by the Game Designers for us to follow. They only asked: desert/arid type map and “the grid position SHALL NOT be changed”. 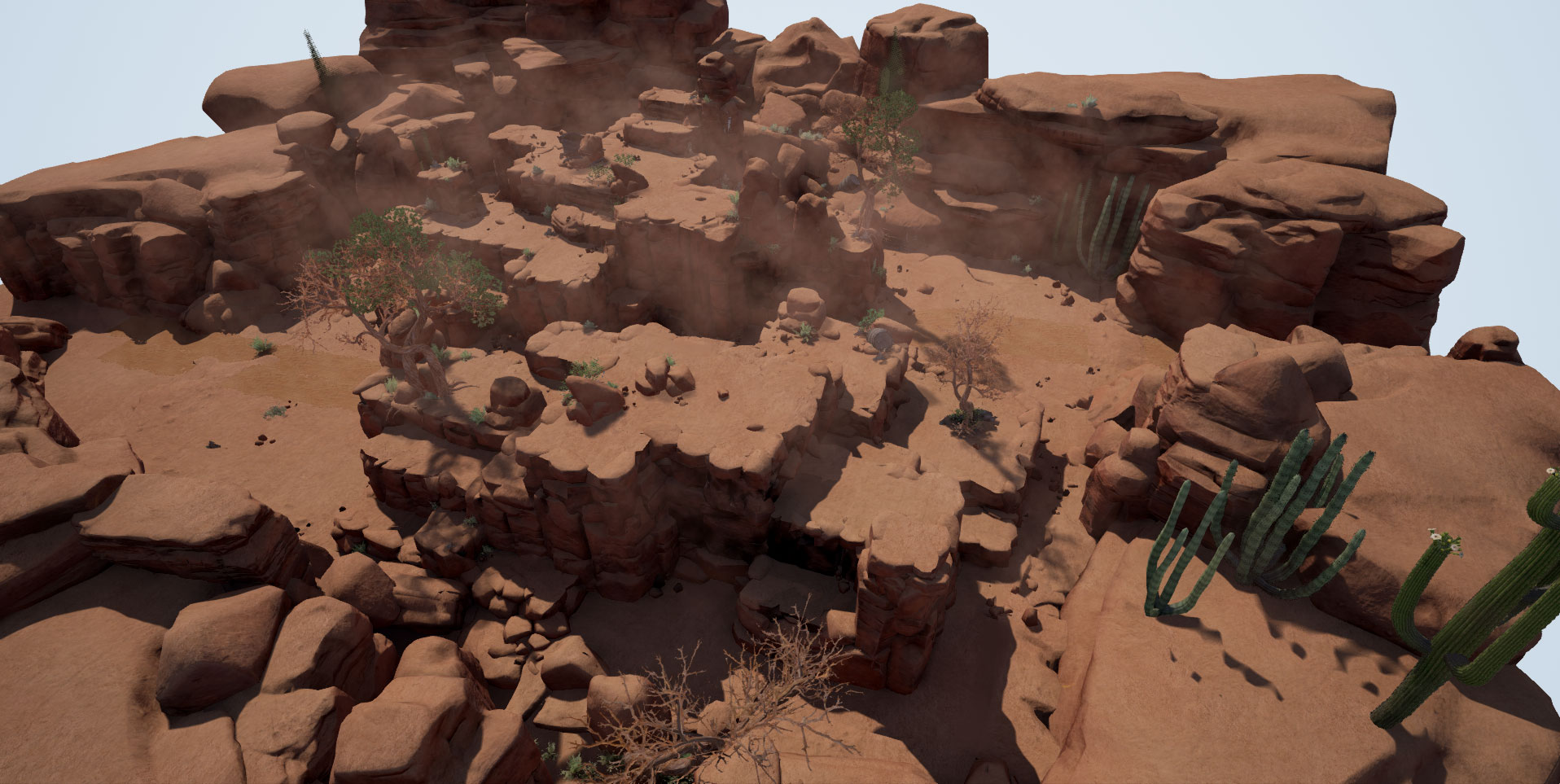 After a few maps under our belt, maps with much larger playable areas with more custom and specific themes were created – which also means new problems and a different approach for each. 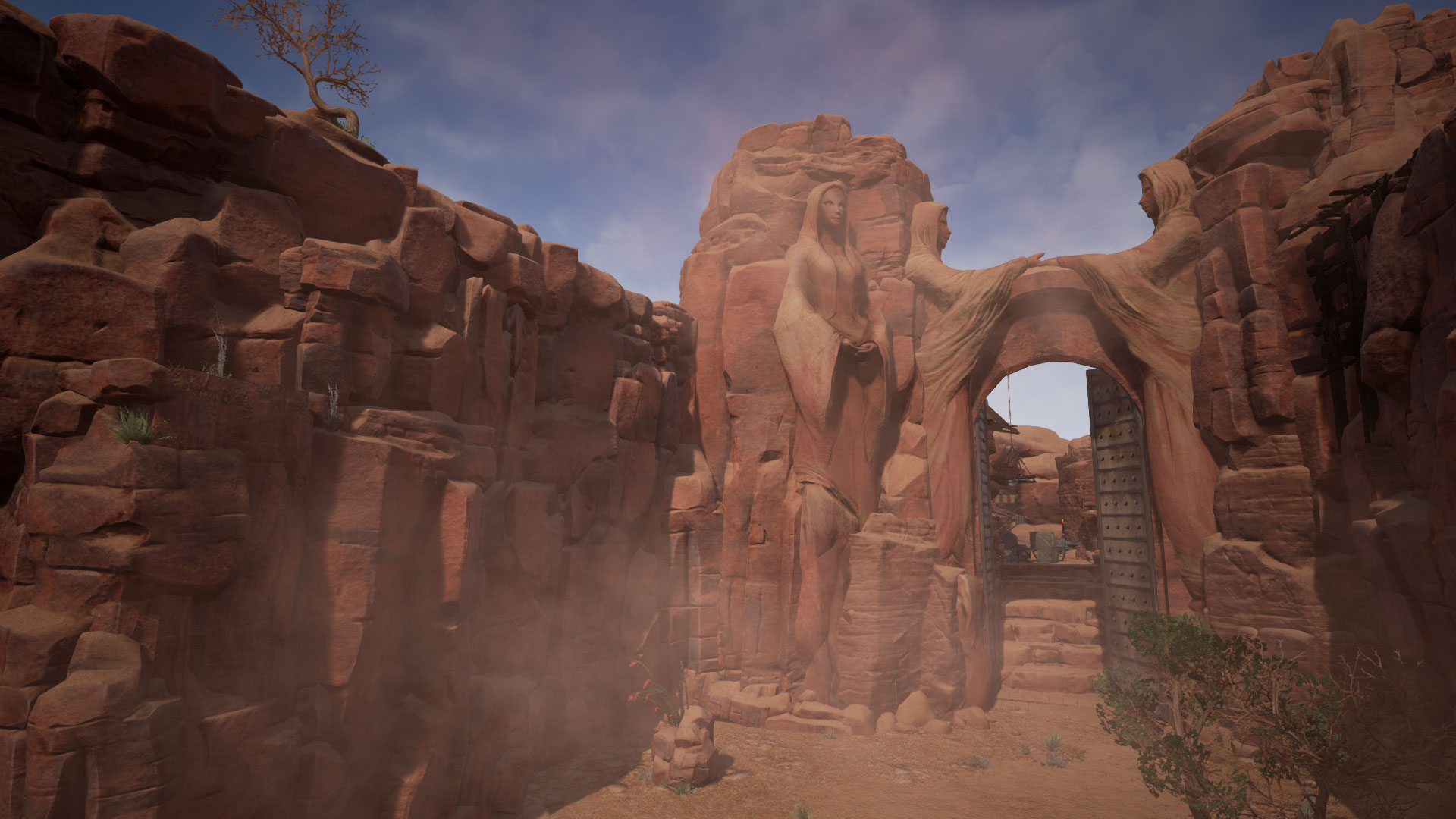 The Three Statues map (or The 2 Statues map as we initially called it) was quite a challenge. Joe wanted this map to have two giant statues that the player could stand on. With this, two problems have arose: one, we need large scale custom assets for the statues, and two, the statues need to also be platforms. We discussed how to tackle the problems and Ken made several design solutions approach issues at hand.

Once the final design has been picked, the concept is then passed on to Lienny to model. 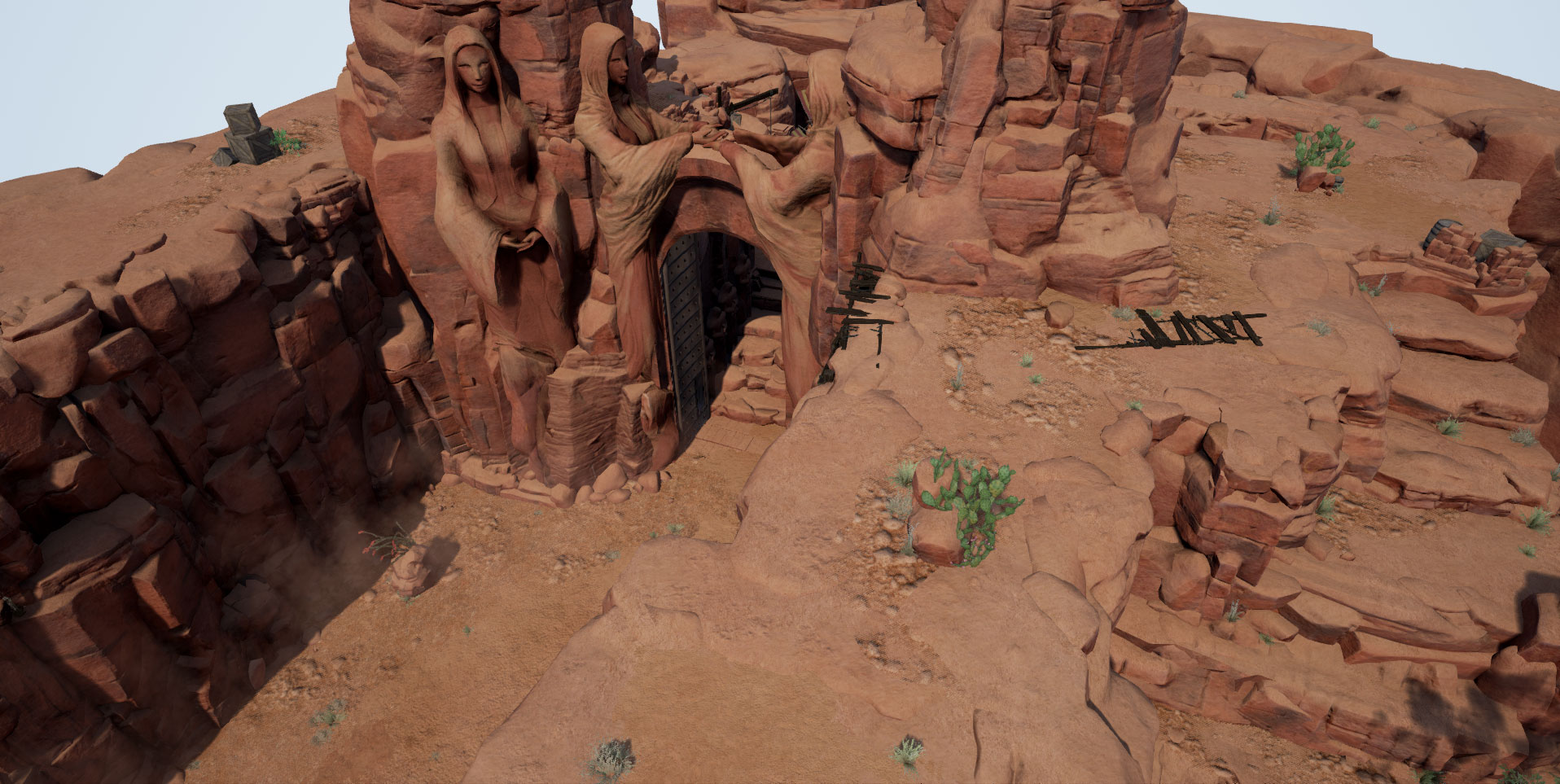 There are a lot of specific design and tweaks for this map, and the concept artist, level designer and environment artist worked really closely on this particular one. 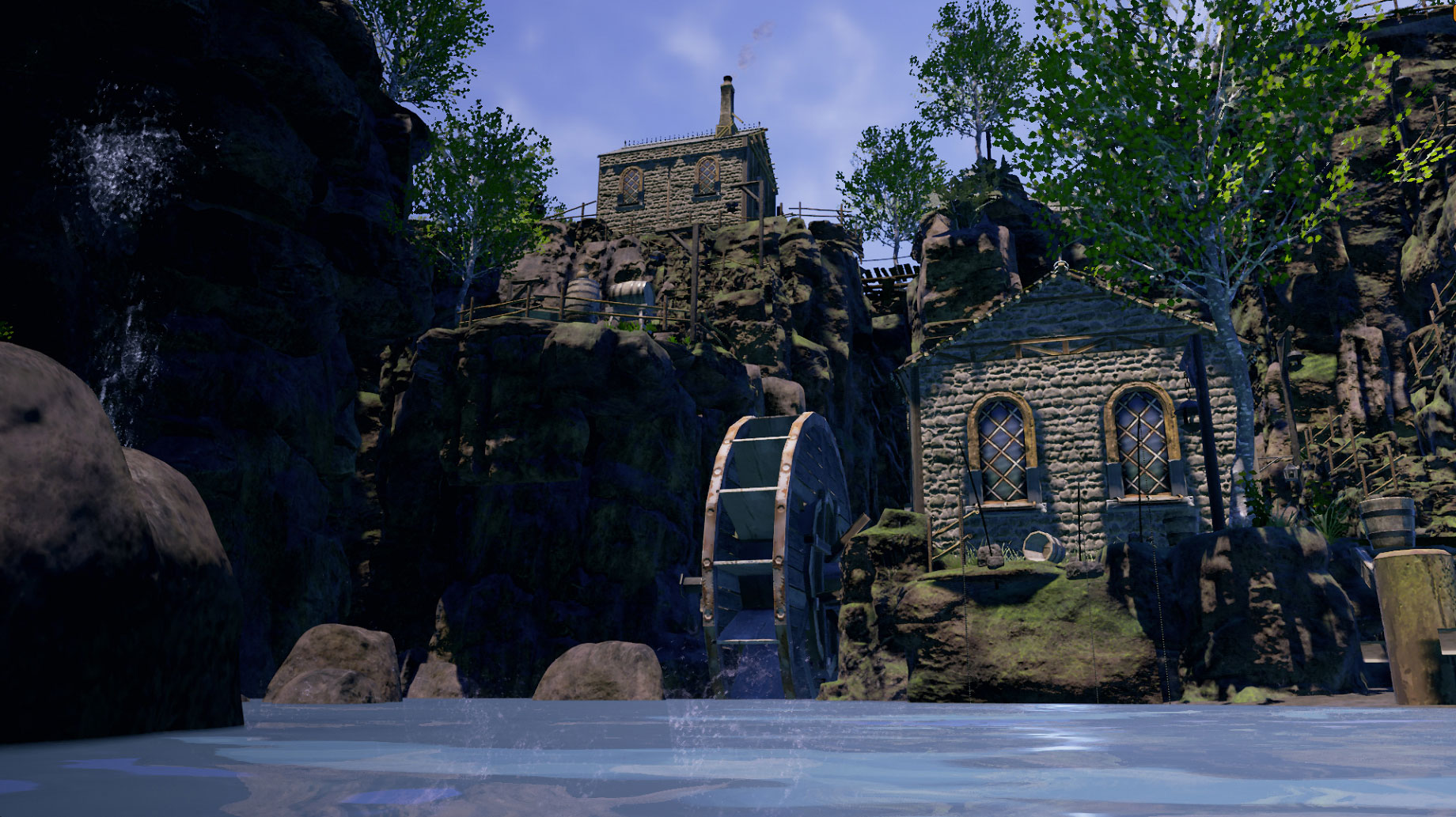 Dresthon is designed as a medium-large town built on cliffs. Unlike the Three Statues map, even though this map was specifically designed to be a cliff city, there wasn’t as much visual requirement aside from this being a town.

Jennifer, who worked on this particular map started off as a 3D artist who was more accustomed with working on detailed concept references, and being given the freedom to explore the visual style of the map with almost no specific references threw her a bit out of her comfort zone. The curse and blessing of this map is probably the freedom that is given by the design team.

Other than being more accustomed to detailed concept references, another issue Jennifer faced was creating any custom assets, material management, deciding on what props will fit in which type of scene/style.

The first major mapmaking challenge would mostly revolve around the aesthetic point of view of the map, which can affect a lot of factors in map making. Since people have different views on what looks good and what does not, changes has to be made on the map. Moreover, there are times the layouts can be such a restraint on how the artist visualize it to be.

There were times when Jennifer had to sit back and stare at the map because it looked unsatisfactory somehow, despite seemingly having done everything she could think of. Sometimes, the lighting needed to be tweaked over and over because it looked too dark, or too bright, or the shadows being too strong. Other times, there were new things implemented, and there would be changes made to the maps. All in all, making a map is a continuously evolving process. 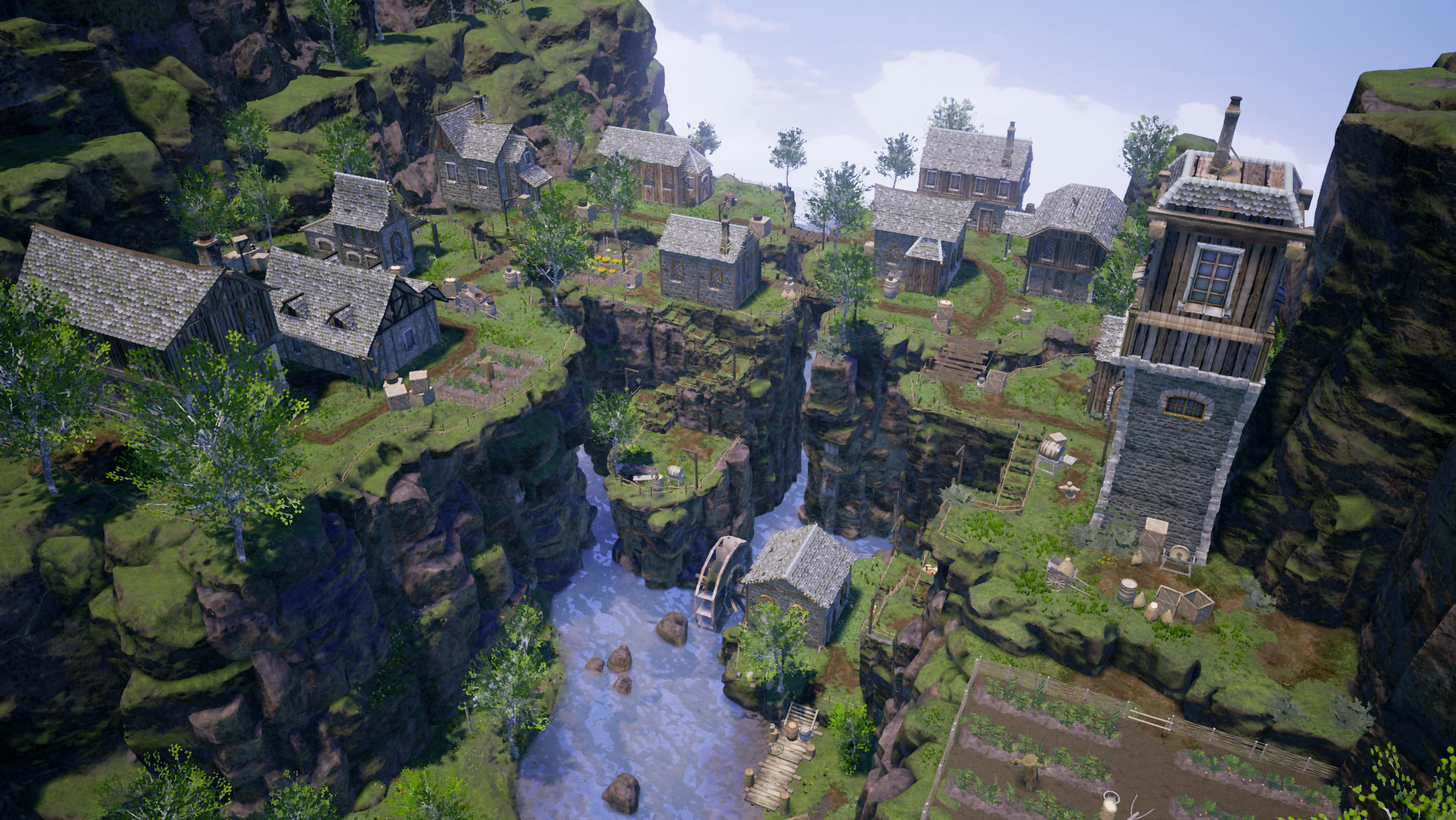 Another challenge came from the technical side. In more than one occasion, there were changes from the programming side and the blueprints had to be re-done in order to get the game running well. Then there could be updates on assets and blueprints that had to be implemented urgently as map making progressed. These could be time consuming, and they ultimately pushed back our deadline for other priorities.

Perhaps the more jarring solution for these issues is more communication between each the teams. Since people have different inputs, more ideas are presented, which means it is so much easier to come up with new ideas on layouts and the overall look of the map. The second solution would be working efficiently and spare some buffer time, in case sudden changes must be made. By working faster and setting a personal deadline a day or two before the actual deadline, there is still a margin of time to spot errors and making changes on the map itself.

Hope you enjoy this week’s meaty blog post. ‘Til next time. So long. Lienny, Jennifer, and Ken signing out.