Hello and happy 2017 everyone!

It’s been a long while since our last post – my bad – so I’ll try to make this update a little more packed with information that usual.

The studio has been back from break for a month now and we’ve been gearing up for both PAX East and Kickstarter in March – let’s just say it’s been a hectic month to say the least. The build we are looking to showcase for both milestones will feature an expanded game loop to what we’ve shown so far that will showcase the strategic map and quest system for the main game.

On the narrative front, we now have a full summary for the main plotlines and have begun expanding and writing out specific quests. For our RPG elements, the way we’re structuring the narrative section of the game will vary a little from the usual Choose-your-own-adventure (CYOA) format to take into account player agency on the Strategic Layer with the format evolving between Acts I and II.

We will start the game off with a more structured CYOA path in the introductory act as it is designed to direct the players towards the starting location of Act II and to give them a more controlled path that will serve as an expanded tutorial for the game. The plan is to layer the different mechanics and gradually increase the complexity of the core game loop to allow players to acclimate themselves to the mechanics at play.

Once we get to Act II the story becomes a wholly different beast and we start layering a few more mechanics to the game loop. After a quick introductory series of quests that follows a more rigid CYOA structure (pictured above), we open up the whole world map to the player, along with the Party Management and Castle layers that will help them progress through the game.

The rest of Act II no longer takes the direct CYOA form, but instead works with a series of checks that will happen at regular intervals. These checks take into account the player’s actions and trigger certain story quests if a particular value like the Personality Plots, Region Counts, or other factors have been met. This method of storytelling can be classified as event-based storytelling and is a method that we think is perfect to drive our story forward while still allowing for player agency as part of the story. Given that events only trigger as a consequence of player action, an event-based storytelling system puts the flow of the game firmly in their control. Naturally, this means that we have to take into account their potential choices and craft the stories around those very possibilities. The biggest challenge to this method – especially for a studio and writing team of our size – is scope creep. While the ideal situation accounts for every possibility, the reality of our budget and ability dictates we approach the story within the confines of the mechanics, with the next challenge being the creation of unique and meaningful choices without an explosion of possibilities that will bog down the writing process.

To be perfectly honest, this is probably going to be an ongoing challenge for me personally: having to balance my goals as the writer, the goals of the story itself, and the finite resources at hand. Still, this is the challenge at hand and one we are more than happy to face to create the narrative experience we want out of the game. 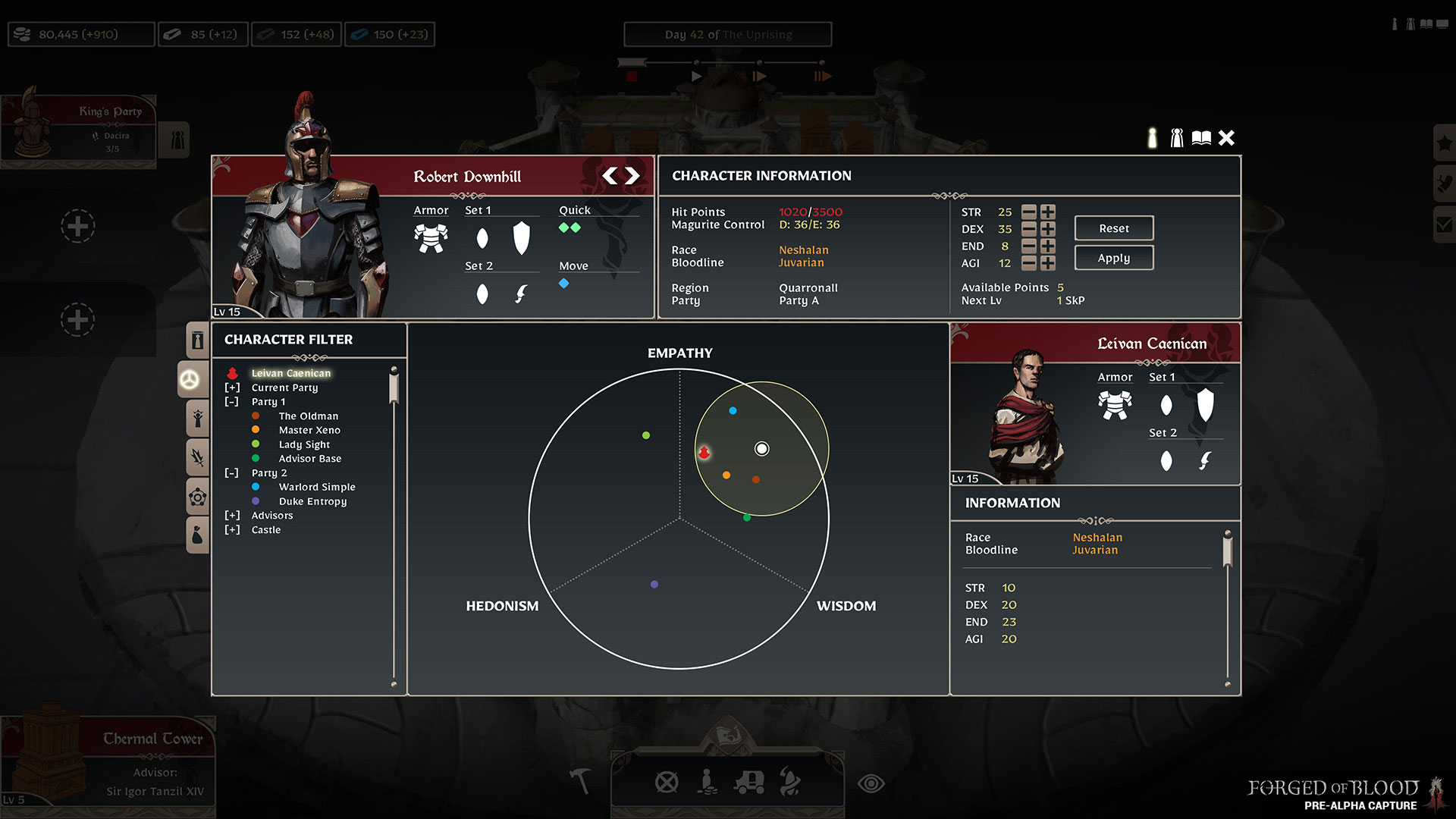 The Personality system we have for the game works to achieve a number of functions. In the context of the world and lore, it serves to punctuate the point that this is indeed a “morally grey” world. This is probably the biggest sticking point for me as a writer as I want to create a game world where actions are not judged as “good” or “evil” and “light” or “dark.” To me, there is no right or wrong, just people and the actions that define them. In terms of the narrative, the Personality system allows us to explore the interpersonal relationships between the characters as part of the story – in particular that of the main character and his brother, who assumed the throne. To that end, we went with three personality traits that we feel don’t necessarily point one way or another in terms of morality, and allow the actions to be judged on a combination of those three factors: Empathy, Hedonism, and Wisdom.

I think, I’ll dedicate a more detailed breakdown of the system for another day but in terms of the game mechanics and the narrative, the PDT will determine the characters that will align with the player. This means characters can leave or take action when they are no longer within the threshold and will have dramatic impact on the player’s choices in managing the makeup of their parties in Act II.

I’ll wrap it up here for now and we’ll have a few more updates as we near the Kickstarter and PAX dates over the next few weeks. For now, we’re excited to anounce that we have officially partnered with the awesome folks over at Gamepedia for our public wiki, which you can find our wiki page here: http://forgedofblood.gamepedia.com/Forged_of_Blood_Wiki